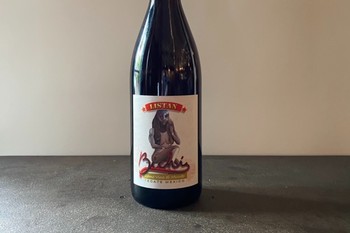 Listan is produced from 100-year-old pie franco Misión (Listan Prieto) vines grown at 2,400 ft elevation on sandy loam and granite soils in the mountains of Tecate, Mexico, right on the California border. Because the grapes are dry-farmed, yields are very low here. The grapes are de-stemmed and fermented without temperature control in 450 liter concrete tinajas. After fermentation, ½ of the cuvee goes to stainless steel vats, and the other goes to half to used barrels for 3 months. The wine is bottled without fining or filtration and just 10 ppm of added sulfur.

Some of the most authentic and delicious wines are born from the least expected places and most unlikely collaborations. In the rugged mountains of Mexico’s Baja California Norte, Bichi has put together one of the most exciting projects in the world of wine.

Spanish conquistadores first planted vines in Coahuila in the late 1500’s, pre-dating vine growing in both Chile and Argentina. The region was so well-suited and successful, that the Spanish Crown ordered production halted in fear of New World wine becoming more popular than their Iberian producers. Many Spanish Jesuit missionaries refused to stop, and continued to plant the Misión grape in Baja & Alta California, and by 1791 had re-established production on their own terms. Today, about 90% of Mexico’s wine is produced in Valle de Guadalupe, with many of the oldest vineyards centered around Tecate close to the U.S. border, a place that was of utter importance for the production of wine during the prohibition of alcohol in the U.S. (1920-1933).